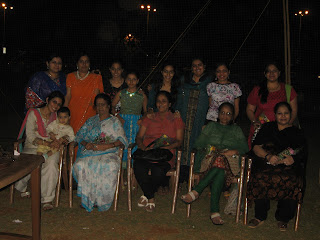 
That day when all the women gathered together,
We met….
…Strength
That the courageous women demonstrated in their lives
Bringing up their children amidst all difficulties.
We met…
…Sensitivity
That each of the kindhearted women reflected
Through the tears that rolled down on other women’s stories.
We met…
…Gratitude
That was expressed by acknowledging
The important presence of the other in their lives.
We met…
…LOVE
The unseen emotion seen in everything we do.
The team of OYA had the greatest of pleasures
In having amongst us
All the lovely women
Who guided us through our lives
Who made us what we are today
Who were the inspiration behind everything we did
Who were there with us through thick and thin
And the experience that all the women had together that day
Was absolutely beyond what words can ever describe.

Out of junior college, and I was bored of Science. I did not think much of transistors.
I had the chance to study Psychology. There was a world out there though, that was unhappy with the idea. It so seemed that 90 % ‘getters’ had to be out of their minds want to graduate in arts! “Oh, did you say Computer Engineering? Okay, will do.” 6 months of programming and I was bored again. I could now not stand the thought of spending another moment studying what else ‘#’ included.

Again – I was chicken and did nothing about it.

4 years whizzed past, and luckily, I chose the perfect job for myself. It was a job that took only as many as 2 years to tell me that I needn’t be chicken all my life, that nothing that # included was going to paint the memories I’d see that one moment before I died and that if I spent anymore time making money for my boss writing thousands of sentences in a language only the computers could understand – I’d have to jump off a cliff (Okay, maybe not. But you get the gist).

It’s been 2 years since I left that dreadful life-changing job – and I haven’t regretted it. When I chose to join Open Your Arms – I’m going to have to admit, I was doing it for my own selfish reasons. Here I was in TISS (Google it, if you couldn’t figure it out), trying to conceptualise a social venture in a field that I wanted to work in, finally trying to make the big shift into the not-so-known-to-me-world and wondering how a computer engineer was ever going to have a good enough answer to the question “What makes you think you have it in you to teach street children empathy?” I thought I had to buck up, and learn something that was of value to me. And my journey at Open Your Arms couldn’t have had a better reason to start.

Today, I’d rather spend my time counselling night-schooling adolescents about their lives, rather than advising my friend how to ‘stay out of the politics in office’. I can’t say in enough words, how peaceful it feels when I see adults realise the power of sharing and understanding each other’s joys and problems. I can’t express how excited I am about all the things I can experiment with here, at Open Your Arms, and all the things I’m going to learn about how hearts and minds run people. And lastly, I can’t thank OYA enough for not judging me by my background and for not frowning in disdain when I said ‘I’m not so good with the computers’.

Thank you OYA for giving me the chance to learn and grow. I admire the job that all of you set out to do every day and I believe in what we’re here for. Here’s wishing us the best in our endeavours.

-Swetha Ranganathan
Posted by OYA - Open Your Arms! at 08:04 No comments:

5 days and 14 workshops is how we at OYA remember that week to be about. Muktangan, an organisation that runs 7 English-medium schools for children had OYA over as one of their trainer entities to put together what was one of their intensive teacher-training weeks. We at OYA wished to deliver a workshop on Professional Etiquette for the Muktangan teachers. 26th to 31st December 2011 was when it was to happen and we eagerly waited for the first day.

On the first day there were 4 workshops to be conducted between the 3 of us - Raheen, Roopa and me (Swetha). Nishita and Dhara would conduct sessions the coming days. But we were all there to get a feel of the environment out there the first day. When we got to the place, the sight before us almost took us by surprise. There seemed to hundreds of teachers making their way up and down the place, exchanging morning greetings and probably discussing what they were in for that week. The trainings hadn’t even begun yet, but with the incessant chatter and the place resounding with laughter and brimming with activity, there was a rush of energy in the air and we knew this was going to be no easy business for us!

We hadn’t even smiled our last smiles at each other before the workshops began, that the teachers started pouring into all the assigned rooms, some running in quickly to pick a nice spot to settle down in. We could see that they looked forward to a workshop full of learning, reflecting and growing. We started getting set for the job!

OYA places focus on how Professional Etiquette is not just a matter of the outside, but that of the thinking we do ‘inside’, within us. To start practicing etiquette in our professional lives is actually to start thinking in a certain way – one that involves care, trust and respect, not just for others but for our work and ourselves. This was what our 1 ½ hour workshops were designed around.

We had our sessions planned out. We introduced, discussed, learnt and most importantly, shared several aspects of professional etiquette and its meaning, importance and manifestation in our daily lives. Role-plays that reinforced the learning during the workshop were the most fun, and we believe the teachers enjoyed them the most!

OYA had a hectic 7 days with the enthusiastic Muktangan teachers, but enjoyed every bit of it! We learnt a lot from the interaction and we sure hope they did too. OYA’s looking forward to more work with Muktangan and its teachers to engage in fruitful discussions on various other important topics that are the breath and soul of the multi-dimensional professional called ‘teaching’. As of now though, three cheers to Professional Etiquette 
Posted by OYA - Open Your Arms! at 08:00 No comments: